Do It Yourself – still part of the Kiwi DNA? 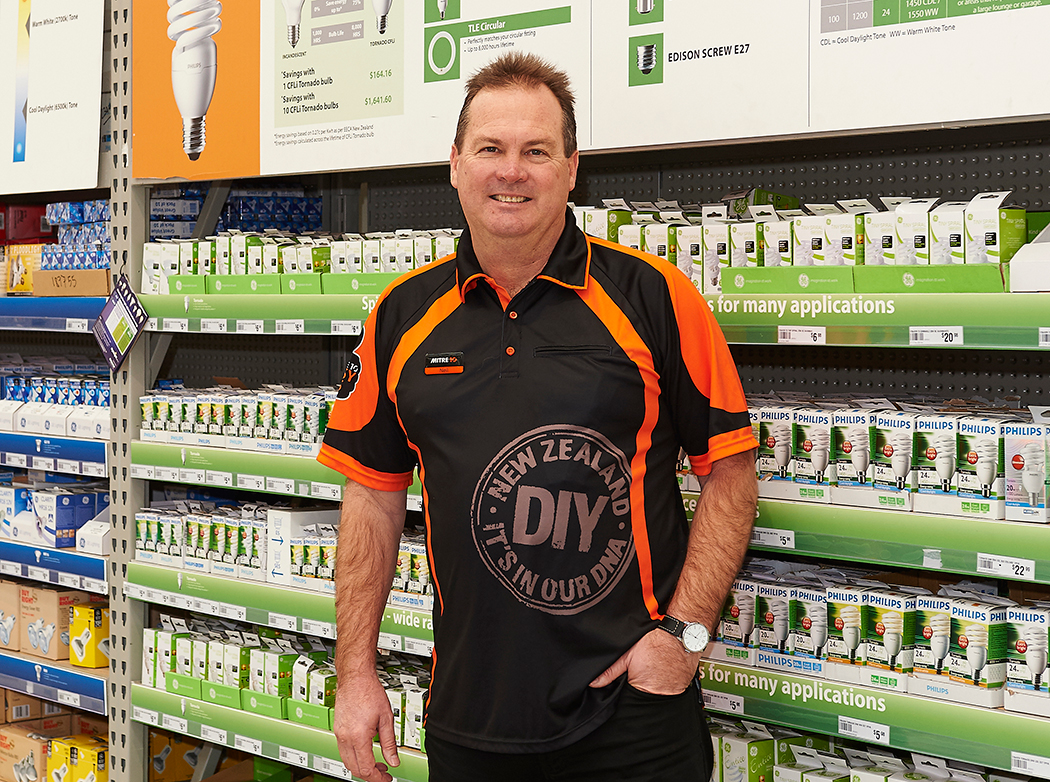 When I interviewed him in January 2014 for our March issue last year (see the story here), Neil Cowie was just a few months into his new role as the head of the successful Mitre 10 New Zealand co-operative.

Eight months later, Mitre 10 would post its first $1 billion-plus result (here), something Neil Cowie would be the last person to claim as “his”.

And, although the co-operative improved on this performance in 2015, his view remains that this is a group achievement, rather than his alone, and a direct result of the members and the Support Office team sharing a common goal and vision.

“When the co-operative is aligned, it is unbelievably powerful. Ten years ago, when those members got together and decided to start Mitre 10 MEGA, that was powerful – there was a lot of risk but they all invested in that decision.

“And that culture has not changed. We still have great people in our store network and so long as we listen and work together, which is what we’re doing, we will continue to innovate and continue to grow.”

Still talking about the year’s achievements, distributions to members were up 17%, something Neil Cowie is unashamedly pleased about.

“This is the reward for the investment and risk that the members are putting into their business – building a store, stocking it and running the business – so those rewards are appropriate in terms of getting a return on that investment”

In this respect, I was moved to ask how many Mitre 10-owned (as opposed to member-owned) stores there are now.

There were seven Mitre 10-owned stores a year and a half ago but, having divested five stores since then, Cowie is hopeful that by Christmas there will be just one remaining company-owned store.

“Our strategy is to put our stores in the hands of member owners – we know how strong the co-operative culture is and we know how well our members can do with a store – it’s the reason why we are the number one home improvement retailer in New Zealand.”

Good businesses attract good people, they say. So when Neil Cowie talks about Peter Rogers-Jenkins, Mitre 10 New Zealand’s former CFO, buying the Whangarei store being “a vote of confidence that our business is in great shape”, you can’t argue with that.

Reading between the lines of this year’s financial result (here), would it be true to assume that the Mitre 10 MEGA stores have been performing proportionately better than the Mitre 10 stores?

“Proportionately yes, but the group as a whole performed very well – it was a fantastic result with sales up 8.7%,” says Cowie.

Nevertheless, Neil Cowie describes growth from the non-MEGA Mitre 10 stores as “a fantastic number”. “The growth was awesome on the back of the recent rebrand – Mitre 10 has certainly experienced the ‘halo effect’ from Mitre 10 MEGA that we were predicting.”

So it’s just not about the big getting bigger and the small smaller? “No, it’s all relative – we’ve got multi-store owners who own Mitre 10 stores as well as Mitre 10 MEGA stores,” he says.

“We’d love the Mitre 10 stores to become MEGA stores – it makes sense – but there will always be geographic locations where it is more than appropriate to only have a Mitre 10 store.

“A Mitre 10 MEGA takes a lot to get built – it’s an expensive investment – so you have to make sure you are getting a return on that investment.”

Talking about customer needs, the first time we met, Neil Cowie said one of his key objectives was getting more return per square metre and increasing the average spend. So has per-basket spend increased?

“The average basket is up across the group,” he says, adding that there’s still work to come on that front in terms of new ranges, new categories and category extensions.

In terms of existing categories, however, there has been positive news to report. Mitre 10’s share of green gardening, for example, continues to perform “exceptionally well”. Paint remains another key driver in DIY, with Neil Cowie claiming an increasing share of that category also.

Part of this growth has dovetailed with the shift to Valspar: “It’s been awesome. The Valspar team have been excellent.”

My interest was piqued when Neil Cowie added further that customer uptake of the new paint offer, even before the advertising campaign broke, had been “fantastic”.

In the context of the co-operative’s new approach to the paint category, Cowie says: “I think what surprised us more than anything was the trust in the Mitre 10 brand.

All of which says that, while customers may these days come to Mitre 10 thoroughly researched, for many, it’s what happens in store that ultimately steers their final decision making.

We talk further about some of the interesting future directions from a category perspective. Some areas set for innovation or expansion include smart homes, healthy homes/healthy living in the broadest context, from indoors to gardens, outdoor living, cordless electric products, Mitre 10’s new kitchen strategy…

But if there’s one step change I am hearing a lot about in recent weeks, from both a home improvement and trade facing perspective, it’s “installed solutions”.

I ask Neil Cowie, is there more than a groundswell for Do It For Me (DIFM) outside of traditional categories such as seasonal heating and cooling? “There is certainly an end-to-end requirement for certain customers and certain categories and that is on our radar,” he confirms.

Still, he qualifies: “I think it’s horses for courses, depending on the category. If there is a need, we will do it – we already are in certain install areas but we will focus on what the customer’s needs are.”

Having said that, his view remains firm that Kiwis are still more DIYers than DIFMers, in line with the Mitre 10 advertising slogan “DIY is in our DNA”.

“Kiwis are DIYers – they love it, we have a culture of wanting to do it ourselves – there’s nothing better on a weekend than getting out there and grabbing your hammer and your tool belt and doing a bit of work.