The flooring category is looking up with the prospect of more new builds on the horizon throughout the country. Will this be a solid base to build upon or is it a little shaky underfoot? Phil Weafer reports. 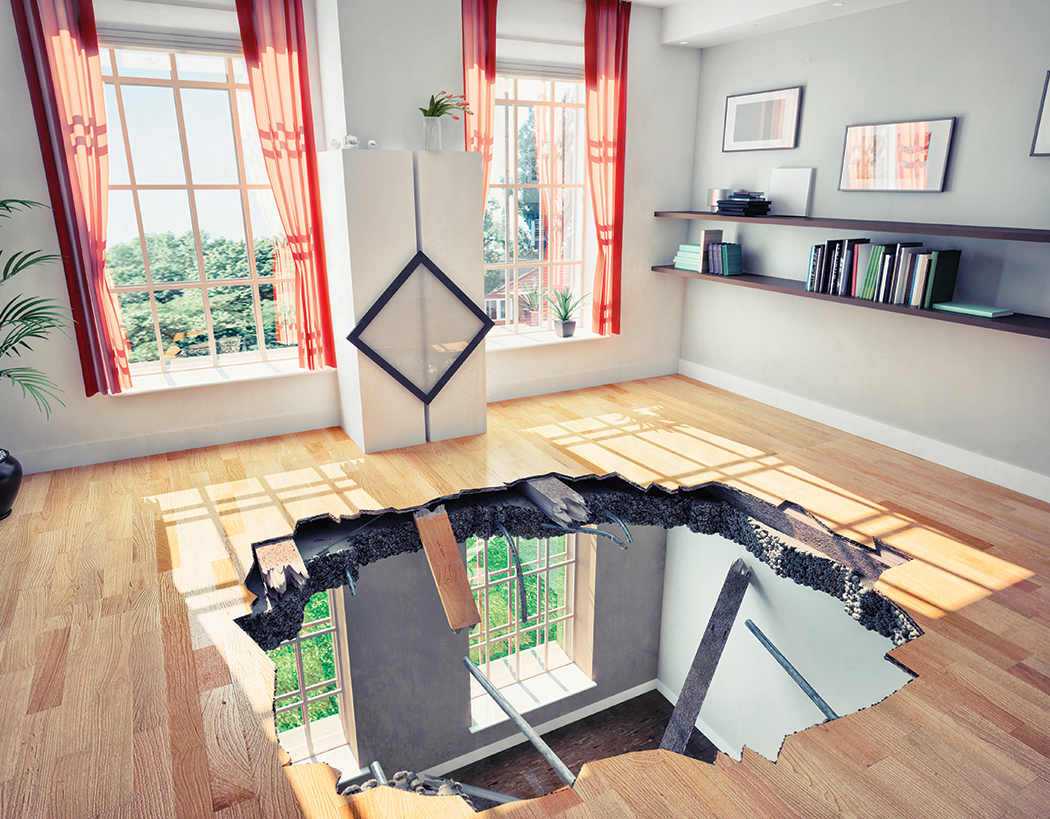 In last year’s look at the flooring category, many of the commentators we spoke to were unsure the market would ever again reach the dizzy heights experienced prior to the recession.

This year there appears to be a greater sense of anticipation for the times ahead but of course lessons have been learned and those in the know say the stronger players always learn lessons from tough times, such as those that came as a result of

Speaking about the changes from previous years to this, Dunlop Building Supplies’ Maureen Maessen is positive with the category approaching a particularly fruitful period coming up to Christmas.

“It’s been tough, there have been a lot of challenges, but things are really looking up now so that’s exciting. The stores feel a lot more confident now and there is always a lift coming into this time of year as well.

“As Christmas approaches people start to think about having work done or jobs in the house they have considered. That’s always a good way to note that this time of year things start to have a lift in the market.”

Maessen also says that the overall confidence is up in the market. The election has tended to put on hold work being done among consumers but Maessen feels this will turn out to be a positive this year thanks to the timing of the voting.

“Having the election next month is a really good thing because people tend to withhold spending when they know an election is coming up. This would be over and done with before Christmas which will be a nice way to go actually. It will dovetail nicely with the election ending and coming into Christmas.”

Staying away from the new build and re-build markets (more on them later) much of the business being generated in the flooring category is due to an increase in the number of renovations being done around the country.

Mapei New Zealand’s Managing Director Murray Simpson: “We are seeing a mixture of both doing well, perhaps slightly more renovations are being undertaken rather than new builds, although the Canterbury rebuild is buoyant with many new builds.

“With the current economic climate and the cost of borrowing consumers are tending to renovate existing homes rather than build. In saying that, the commercial market is buoyant and we expect to see strong growth well into 2015.”

Rex McGill from FloorNZ, the authority for New Zealand’s flooring industry, says that the renovation market is huge: “I would say somewhere in the region of 60-70% of our work in the flooring industry is renovation work. People’s homes nowadays are almost fashion statements. So every 7-10 years people are looking to change them.”

Such is the level of activity that McGill feels his members could survive on renovations alone: “The builders could technically stop building tomorrow and we would still have work because people are constantly changing their houses, updating them and such.”

A TALE OF TWO CITIES?

Like many categories in the hardware channel, flooring has seen an increase in work due to new builds in the Auckland region and the ongoing Christchurch rebuild. But what about the rest of the country? How have the other regions been performing over the last 12 months?

“The rebuild has been going on for quite some time now. I don’t think we can put all the success in the market wholly down to the rebuild but I think people are now moving on, looking at their homes and doing some renovations. It’s four years now since the quake so I think people have seen that things have settled down and started renovations and getting homes to the stage that they wanted.”

Mapei’s Murray Simpson is another that sees more than just the “big two” performing well: “We’ve had very good results throughout the regions with good growth evident in all of our product ranges. We are seeing more diversity in the choices people are making as well.”

Last year, FloorNZ’s Rex McGill pointed to a lack of skilled labour as a major issue for the whole country that would only increase as the work levels increased. Is this still a major concern?

McGill says it certainly is: “With the volume of work coming it is going to be highlighted even more and that unfortunately is more of a result of the economic downturn. The training cycle in the construction industry mirrors the economic cycle. So you should be training people when there is less work because you know there is more work coming.”

Which means that “Unfortunately when you’re on the up cycle like we are now, there aren’t enough workers. I give it another 18-24 months and you’ll really notice it in the cost of having tradesmen to come to your house – just getting them there will be tough.”

Mapei’s Murray Simpson is another that sees the skilled labour shortage as a major concern moving forward, saying: “This is very evident throughout the market and will pose problems for supply going forward in both Auckland and Christchurch. Skilled workers are at a premium and installation prices will eventually reflect this situation.”

Another issue facing the market, according to Simpson, and also possibly training related, is the ratio of cost of flooring in relation to the overall cost of a home.

“We so often see installations that have gone wrong through the use of incorrect product for the situation. Mapei always promotes systems thus offering guarantees for our products’ performance.”

One trend that was often mentioned when speaking with players for this article was the notion of consumers having so much more information readily available to them. Maureen Maessen at Dunlop Building Supplies is just one player to stress that the knowledge that consumers are entering into stores with is at an all-time high.

“With the internet so readily available, people are doing more homework and researching before they actually go in and start buying what they need, which is good. But then of course the store staff have to then run through the product available in-store and what it does.”

Still, as with other categories, flooring will not sell itself and retailers or merchants that offer product knowledge and insights will be best placed to make the most of a bullish market.

Maureen Maessen agrees, saying that upskilling store staff is as a result more important than ever. It is something, she feels, needs to be done by suppliers and at store level.

“If you start giving out information that the customer can understand and their project works, they’ll come back to the store. They’ll have that trust and return to that store for other projects.”

Murray Simpson at Mapei feels that while technology is advancing and making an impact on the market, the expertise of manufacturers and representatives can never be underestimated.

“It is too easy to misinterpret data or installation techniques by relying solely on information gleaned from the internet. Nothing can replace the knowledge that the experts can impart.”

As we find with other categories, TV shows have been making an impact on the DIY market. FloorNZ’s Rex McGill for one says that home improvement and DIY shows have had a big effect on the attitude of consumers.

“20 years ago if you went into a supermarket you’d find one or two DIY/housing magazines and if you go now there are whole sections. The Living Channel, The Block, House Rules, Mitre 10 Dream Home, those programmes have certainly opened people’s eyes into beautifying their houses.”

A NEW SYSTEM TO CHANGE THE GAME?

Conceived in 2010 during a conference/workshop in Nelson, the system consists of a combination of structural materials making the most of the lightness of engineered timber, the cost effectiveness of concrete anchorage and the high strength of pre-stressed or post-tensioned reinforcement.

Concrete is a cost-effective material with high compression capacity that allows the creation of a bond between the pre-stressed reinforcement and the concrete and the transmission of those stresses into the timber unit, via the use of connectors between timber and concrete.

The pre-stressing induces a pre-camber that balances the self-weight and a portion of the live load. The unique feature of the concrete anchorage allows the floor to be connected to concrete beams and creates moment continuity at the mid supports.

A commercial building in Richmond will be installing the system and prototypes have been tested to prove the higher structural performance of 3PT compared to traditional timber flooring systems.

According to market statistics from the Association of European Producers of Laminate Flooring (EPLF) looking at 2013, the laminate flooring market is recovering.

Growth has been seen particularly in Eastern Europe, as well as in Asia and North America. Though slight sales declines continued in Western Europe, 2013 was still a good year overall for the EPLF.

As recently as 2011, North America experienced a dramatic slump caused by the challenging economic situation. In 2013, North American sales picked up again with the USA in particular showing an encouraging result for European laminate flooring manufacturers and Canada remaining stable.

In the Asia-Pacific, the total sales of European manufacturers for 2013 showed a slight increase. The Chinese market, including Hong Kong, showed particularly clear growth due to exports from European producers in the premium sector.

An article on the Networx website offers “seven ways to keep hardwood floors looking lovely”. Networx is an American website that offers free estimates to readers on home improvement projects and also offers tips and articles from professionals and experts. So what are the best ways to keep hardwood looking great?

Clean – Remove dust and dirt regularly using a gentle implement such as a dust mop, soft-bristled or rubber broom, or an attachment on a vacuum.

Wash – Use a minimal amount of warm, not hot, water to avoid soaking the wood. Use plain water or a mild dish soap solution as vinegar, ammonia, wood soap and improper use of steam cleaning may damage the wood. Follow up any washing by drying immediately with rags or microfiber cloths.

Protect – Avoid marring the surface with scuffs and scratches with items such as high heels. Regularly buffer the legs of furniture with felt pads.

Control climate – It’s important to control humidity levels and protect against extreme temperatures. Over exposure to hot, dry air can cause hardwood flooring to split at the seams. Moistness in winter can cause swelling.

Even out the wood – Hardwood is susceptible to “cupping” i.e. developing an uneven surface due to absorption of moisture. When this happens, sanding or planning is necessary to even the wood out.

Patch – If the wood has been badly damaged in one spot, it may be necessary to remove a board or two in the affected area and replace them.

(Re)finish – After sanding, any trace of dust needs to be removed. It is then up to the owner whether to stain or finish the floors. The former adds colour and gives an attractive appearance, while the latter also serves to protect. There are two main types of wood floor finish for residential purposes: wax penetrates the wood and creates a seal, while polyurethane forms a protective coating without soaking into the wood.